This national historical landmark is the part of historical town reserve which has started to deteriorate in recent years. It has lost the function of living house during the last political regime while there was furrier workshop situated. Only one apartment has stayed occupied.

The company Lcitor group has become the owner of the property at last and they had decided to reconstruct the property in its original style. The company’s director Patrik Kurimsky says: “It isn’t easy at all; as this type of investment needs another calculating formula then developers are used to. The fact that this building is listed has brought many building restrictions.

The supervision of historical sights listed buildings has made the investor to arrange the whole exterior as it used to be and also reconstruct some of its inside features such as secession staircase, paintings inside the entrance and the only apartment kept in good condition. “It’s the most valuable part of the house because of maintenance of features such as original door with etched glass or stucco targets on the ceilings, just as Vladimir Majtan the worker of Regional authority of historical sights in Zilina has brought to our attention.

Conservationists welcome that the investor has bought the property and their interest to return its original function of the house. “We are pleased it is going to stay a living house without departure offices or some other commercial premises”, said Mr. Majtan, according to whom this is one of the last listed buildings in the centre which are being in emergency conditions. One of the major requirements of conservationists was to keep the house’s height therefore the company is marrying the two living floors including the roofing reconstruction. “It had been a great challenge for the company and an architect to combine historical features with the modern living style in the centre of town”, said Mr. Patrik Kurimsky about reconstruction process.

The bourgeois’s house located only 150 meters out of Marianske Square should have brighten the historical centre of town in its original beauty already next autumn. 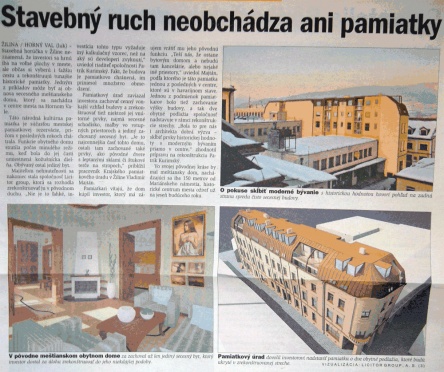